Tuesday was Rader’s football jamboree. 4 teams got 10 offensive plays or played until they scored (whichever came first). Rader’s team was 4th on the field and played Defense first…it seemed like forever before the Offense took the field because of this: 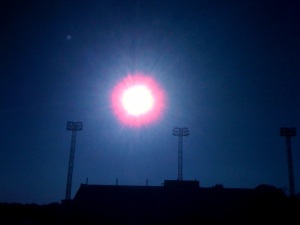 Yes, we were staring straight into the giant ball of fire as it blazed us with 100 degree temperatures. So not only were we sweating like sinners in church, we were blinded. Which made watching the actual games rather difficult. I did take some pics, but you’ll see…you can’t see anything. 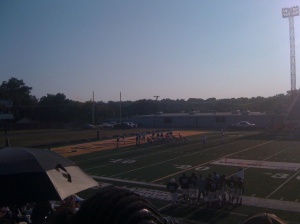 Ah well, I suppose it’s the effort that counts, right?

It’s so weird seeing my kid in full gear, sauntering along like a man-child. Like he was born to wear that uniform and those pads. It’s awesome…but so, so, so weird.

His poor Nonnie is beside herself. She said she’s tortured herself by going to the soccer games (she doesn’t get that sport at all) but did it for her grandkids. However, she draws the line at Foozball. I’m pretty sure she thinks foozball is, indeed, the debil. She just wishes with all her heart that one of the grandkids will play basketball. I suppose Rader could play…though he shoots freethrows like Shaq. (it ain’t pretty)