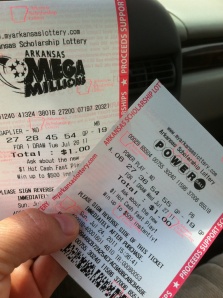 The only math I’m good at is Lottery Math and so this morning while I was driving my kid to football practice at 6:15 AM, we did Lottery Math.

Rader feels like once we win the lottery, $15M should be just about right for him. Yes, that’s what he thinks I should give him…hahaha. I said I would give he and his brother the same amount and it would remain in a Trust Fund until they were 30.

Apparently this was unacceptable. He should have more money than his brother and he should have full access to it at 18.

While I’m spending money I don’t have, I believe after I do win the lottery, I’m going to hire someone to drive my kid to his predawn football practices. Don’t punish me, bro! That ain’t fair!

I’m very happy to announce that I’m going to be adding Project Runway to my recap resume over at Hey Don’t Judge Me! I’m working on Episode 1 right now and am planning to have future episodes up on Friday afternoons.

Sadly, we’re still having some behind the scenes upgrade activity, so I can’t post anything new yet. My Bachelorette posts are ready to go and I have high hopes I’ll have them up today, as well as my first Project Runway. I’ll keep you posted. But just because I like you, I’ll give you a little sneak peek of what I’m writing:

Julie Tierney, Grand Junction, CO is showing a collection of things made from blankets. I’m not even kidding. You know those woven blankets you can buy for $10 at every southern and midwestern convenience store? We always called them “Indian” blankets growing up. She is seriously making dresses out of them. Or that should probably be “dresses.” it’s an “outerwear” collection and Nina says “You have a passion for outerwear, clearly.” What I heard in my head was “You have a horse blanket fetish.”

The gayest of all the gays is Gunnar Deatherage from Louisville, KY. Heidi wants to see his look for an average woman. I’m expecting him to pull out yoga pants and a sweatshirt in a size L (or possibly XL, if it’s Thanksgiving) Instead he pulls out this pastel pink dress made from satin sheets, crystals, and broken dreams. I need to go to Louisville and meet some of his average woman peer group.

I’m not going to talk about the heat. Y’all know it’s hot. I don’t need to keep harping on it…I’m usually the one bitching about people who bitch about the heat anyway. (You can bitch about the winter all day, though.) I have air and electricity and there are plenty of people who don’t right now (Benton, AR where a substation caught fire yesterday) so I’m gonna be thankful and happy about it.

Oh and for you Kindle owners, you can request an autograph for my books on Kindle now. It’s pretty darn cool…check it out: Kindlegraph