We have high school orientation tonight. Rader is going to attend Catholic High for Boys here in Little Rock next year. It’s a great school academically. Ideologically it is not my preference, but we’ve raised a smart kid who thinks for himself and hopefully will not allow the prep school uniformity change who he is at his core.

This is the kid who wears HeeHaw overalls and “John Daly” pants on purpose. This is the kid who decided to grow his hair out and donate it to Locks of Love on his own. This is the kid who’s best friend is of Pakistani/Indian descent… So yeah, the prep school white-washed “let’s all be the same” thing worries me. However, academically, this is a top notch school and Rader needs to be challenged. He’s so upset with his current Social Studies teacher for just ‘giving up’ by making them do glossary words as crossword puzzles and COLOR. Yes, they have a project where they have to draw and color a scene from a movie. For Social Studies. Really?

Speaking of his hair, check it out: 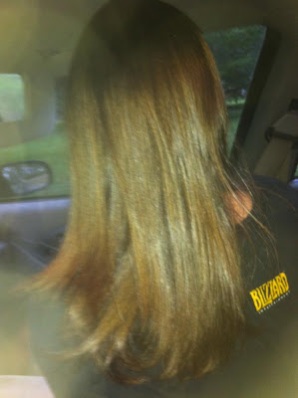 I asked him today if he was going to wait until school starts to cut it (they are required to have their hair off the collar, above the ears, and above the eyebrows at Catholic). Rader said he might get it cut the last week of school just to freak out all his friends. Heh. No matter when he cuts it, he definitely has enough to make a sizable Locks of Love donation.

In other news, I’m a little riled up over these super conservatives trying to legislate women’s bodies. Georgia passed the “women as livestock bill” yesterday. That title came about after Rep. Terry England (R-Auburn) compared pregnant women carrying stillborn fetuses to the cows and pigs on his farm. According to Rep. England and his warped thought process, if farmers have to “deliver calves, dead or alive,” then a woman carrying a dead fetus, or one not expected to survive, should have to carry it to term. I don’t care what your views on abortion are. I care that men who can think of women as livestock, should not be making laws concerning women. If they are so big on less government, then why are they trying to legislate women’s bodies? That sounds pretty big to me…/political soapbox.

Sorry. I don’t often talk politics here, but this is a huge hot button for me. I’m passionate about HUMAN rights. Period. Mind your own business, stay out of people’s bodies and bedrooms.