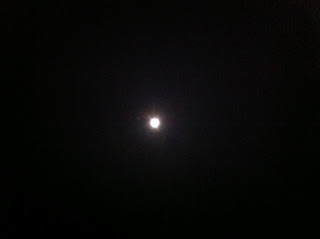 object in picture is larger than it appears…

El Jefe and I had an absolutely fantastic weekend. There was a full moon, football, friends, hammocking, a covered bridge, lots of giggles, a little hysteria and a BADGER! 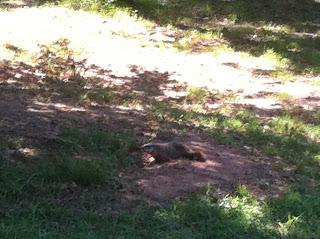 I’d never seen a BADGER! up close before. I’m pretty sure she’s a momma BADGER! and that hole is her den full of babies. Or possibly it’s a den of iniquity. Either way, she was hissing and being very protective. I didn’t leave the truck. haha I don’t need to add death by BADGER! to my resume.

We had a great day walking the dogs in Burns Park by the covered bridge. We almost got run over by some cyclists a couple of times. I swear, they just appear out of thin air and then they’re all BEHIND YOU! and you’re all WTF! is there a portal in that pine tree? Trin and Ruby had a great time and they were both worn plumb diggity out by the time we were done. Especially Ruby. 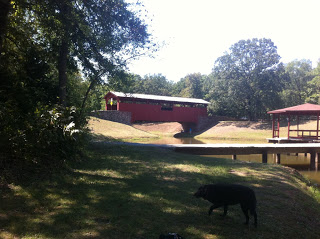 Bobcat Greyskull went from in a coma to full on attack mode. He keeps knocking my vase of roses over. I think he hates flowers. We also can’t leave the bag of dog treats on the counter because he will knock them to the floor and do everything in his power to get a treat. He actually will come to the kitchen and SIT for a treat like Ruby and Trin Trin. It’s the funniest thing. He doesn’t know he’s a cat.

Hope you guys had a lovely weekend. Can you please make Monday speed up? Thanks.