I’m a big Survivor fan, but las season was boring. I mean, there were some fun characters, but overall, it didn’t have the spark it usually does.

But that’s all about to change. This season is Fans vs. Favorites and it’s already off to a fun start. 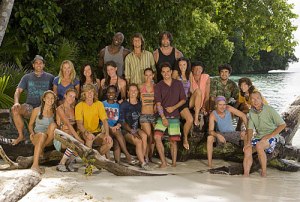 They’ve brought back some of my favorites (hence the name) Yau Man, Ozzy, Pavarti, James, Cirie and the terrible, awful, love-to-hate Johnny noFairplay.

And the Fans all seem motivated and ready to rock. Though the one chick (Kathy? I think) who picked up the first immunity is a bit of a nutter. I’m not sure how long she’s gonna last. Poor thing. She was already highly stressed during the first night and she wants to make it through 39 more? Really?

Last night started off with a bang, when my skinny little Yau Man tackled Johnny noFairplay for the first immunity idol. Yau slammed Johnny into the canoe and grabbed the immunity. 10 points for the skinny old man!

Now, Ozzy and James are hooking up with the two hot chicks on their side. Pavarti doesn’t play the game with out flirting. And it works for her. But I have to say, it looks like Ozzy and Amanda are really going to hook up. Both couples were tangled up like a hairball last night, but next week, it looks like Ozzy and Amanda get an overnight stay on exile island…where they take their lurve to a new level. Heh. Cracks me up.

The fans definitely outplayed the faves yesterday. Which maybe will humble the faves now and make for a decent game.

The other show I watched was Lipstick Jungle. I enjoyed it more than I thought I would. It may end up being a keeper. We’ll see…

ETA: I was VERY disappointed in the way Survivor ended last night. Very anti-climatic. Honestly, I was hopeful that noFairplay was really working his bad boy mojo. But it looked like he just wanted to go home. Whatever. Totally disappointing.