Ok. It’s not a Dirty Little Secret, but it’s a confession. And some of you might not like it…but I’m going to risk it all and confess anyway. 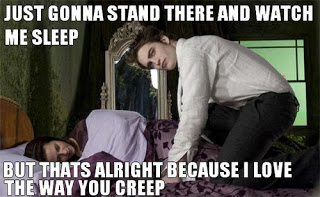 I do NOT understand the obsession with Twilight and I really don’t understand Twi-Hards. I just don’t. I find the entire series reeee-donk-ulous, mainly because it romanticizes a dude who stalks a girl and then calls it ETERNAL FOREVER LURVE and then when that girl decides she wants to be a vampire so they can spend ETERNAL FOREVER together, he takes her choice away from her because of HOW IT WILL EFFECT HIM. Until, of course, she almost dies having his baby, then of course, she can become a vampire because that way he has “saved” her. Dudes. I just don’t get the appeal.

I find Bella to be wimpy, weak, and a waste of air. She makes “emo” look like a Unicorn farting a rainbow of skittles, sunshine and butterflies.

The first time I read the book, I got the appeal of Edward. Until I started to think about the message the story was sending… Girls need to be saved by a big strong man. Girls can’t make their own decisions about when to eat, drink or sleep (or even walk with their own feet. Seriously. Bella was carried everywhere!)  And my favorite: Girls find it very romantic to be secretly watched from the woods and even from their own bedroom. In my world, that’s considered cray-cray and is grounds for a giant restraining order. Or a dirt nap. Because damn, please don’t sneak into my room and watch me sleep and tell me it’s because you love me…

So there. That’s my confession. If you want to read some hysterically funny breakdowns of all the books and the latest movie, here are some links for ya… Seriously, worth the read…for a number of reasons, and not just the “sparkly peen.”

Return of the Sparkle

Final Chapter in the Sparkle

Here’s the thing, it’s okay if you disagree…I know I’m in the giant minority here. But damn, y’all. Stalking and controlling ain’t right.

The newspaper headline screams: “Eighteen-Year-Old Slain by Husband after Giving Birth.” (eh. Okay, actually 18 year old turned into a vampire is more accurate.)As you continue reading, you learn that the young woman was brainwashed by a strange blood-drinking cult who call themselves a “family,” though none of the members were actually related. The young woman’s husband was much older than she and had a history of violence. In fact, you learn that her husband used to stalk her prior to her marriage, watching her secretly from the woods near her home and climbing into an unsecured window at night to watch her sleep without her knowledge. Once the young woman, then seventeen, was initiated into a relationship with the man and his “family,” she was encouraged to marry right after her high school graduation. (THIS is the crux of the entire series and what concerns me the most as a parent and a reader. Also, vampires shouldn’t sparkle.)The young woman reportedly had bruises all over her body after returning from her honeymoon, where she also reportedly became pregnant. Her husband was not happy about the pregnancy and wanted her to have an abortion. She refused, eventually leading to him ripping the child from her womb, then, draining her of her blood until she finally stopped breathing. Sounds torturous and sick, doesn’t it? But in fact, this is the basis of a tween-teen literary phenomenon called the Twilight saga…

Now, this is a VERY literal interpretation of what happens, and let’s face it, saying he killed her is kind of a stretch, however, the underlying facts remain the same. He controlled and emotionally abused Bella, he stalked her and married her right out of high school and his “family” encouraged this, then once she became pregnant, his family hid her from her family. Is that what we want for our kids? Ugh. No thanks.

Sorry. Not feeling so funny today. I’m just kinda over Twilight and I’m tired of being quiet about it…