My niece Double A.

When I was a little girl, my favorite thing to do on the 4th of July was play fairies.

You don’t know how to play 4th of July Fairies? What is wrong with you!?

You light up sparklers for each hand and you “fly” around the field yelling “I’m a fairy!” I taught Double A this game last night, and we spread our fairy sparkle far and wide at the compound. I’m pretty sure it’s still glowing out there. 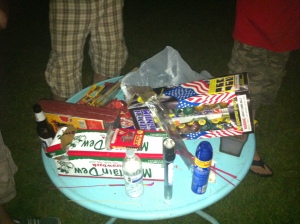 Ian and Ben and my brother Mike bought ALL THE LOUD FIREWORKS KNOWN TO MAN and we blew shit up for hours. Well, they did. I lasted about 30 minutes. The skeeters like my sweet blood way too much. They apparently don’t even care if I bath in Off or Skin So Soft or Gasoline. It doesn’t matter. The want to suck me dry.

For a while, the entire county sounded like we were at war. I thought maybe the British were actually returning…and Paul Revere fell down on his job. But by 11:00, the bang, bang, booms had stopped and the world was quiet again.

I think everyone was excited we weren’t under a burn ban. I can’t remember the last time it sounded like that. I bet it’s been since I was a kid.

OMG. we used to have the best 4th of July celebrations when I was younger. Bonfires, roasted weenies, s’mores and lots of booms and bangs. This would have been the perfect year (weather wise, especially) to have brought back the Compound Celebrations, but with Jefe still down with the plague, it just wouldn’t have been the same. (you know he doesn’t feel well when he didn’t even come outside to blow anything up!)

Today, the kids are coming back to test out the waterproof fireworks in the pond and to blow up old toys. Good grief. We have created monsters! (Monsters of awesome)

I still have some sparklers left, so I shall play fairies one more time. 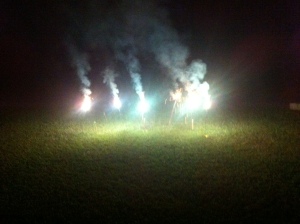 Have a fantabulous weekend, bitches. I will be sparkling and fairying all weekend long. If you need some extra awesome, just stop by the compound. I have plenty to spare!