If you haven’t watched season 3, episode 9 of Game of Thrones yet, WHY ARE YOU EVEN ON THE INTERNET? Anyway, here’s the very unnecessary “Spoiler Alert” message.

So, I rewatched THE RED WEDDING last night. I really wanted to focus on the foreshadowing that I had purposefully ignored the first time.  And I’m only going to discuss the wedding part of the episode because I’M STILL NOT OVER IT! 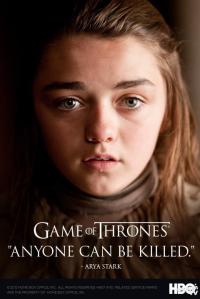 e opening scene when Robb and Catelyn are strategizing and right there on the  war board the House of Bolton and the Twins are at the Starks’ back… and you see it…and you know it’s not good… but you ignore it and think “Well, at least I know for sure who’s torturing Theon. Maybe the Bolton’s are doing that for the Starks! Because Theon did betray them.” But then you hear Robb make the comment that if they go forward it’s likely they could die like Ned (his father) or possibly even worse… And again, the little niggle of WTF? goes off in your head, warning you that SOME VERY BAD THINGS ARE GOING TO HAPPEN. But no. They’re going to the awesome wedding and everyone will celebrate and be happy because this show never kills anyone you like, right? RIGHT?

As Arya said to Lord Tywin himself: “Anyone can be killed.”

And honestly, if you’re gonna watch this show, you need to remember that at the beginning of every episode.

I’m not reading the books because I’m enjoying the surprise of the show. Also, I know they aren’t following the books that closely (I mean, how could they?) I do enjoy the way the writers have abridged the complicated storylines into a wonderful show. The character development is outstanding. And it also seems almost wasted, since EVERYONE FUCKING DIES. Anyway.

So, after rewatching, it’s almost like the foreshadowing is stripping naked in front of you and showing its junk to everyone! I mean HOW CAN YOU IGNORE IT??

The Hound and Arya…wow. What a pair of damaged and broken individuals. They are really good for each other in a way. The Hound hardens her and Arya softens him. And during their little war of words, we get another giant naked dancing piece of foreshadowing:

The Hound: “You’re almost there. And you’re afraid you won’t make it. The closer you get, the worse the fear gets.”

Wow. This brutal piece of honesty is where the naked dancing foreshadow also slaps you in the face with a fish.

Okay, then we get to wedding. Lord Frey dresses down the King of the North and chastises him for breaking his oath. He shows off all the ugly daughters and granddaughters Robb could have chosen from…and Edmure (who is about to marry one of them) stands there visibly horrified. Of course, what happens next? After they feast on Salt and Bread (hello naked foreshadowing) Frey walks the bride down the aisle and she’s beautiful! And Edmere relaxes and is all excited. And Robb relaxes and thinks everything is okay…

“The wine will flow red and the music will play loud.”

IT’S ALL COOL, FOLKS. Here, havc another drink and ignore the gathering army…

And Catelyn sits next to Lord Bolton who mentions he happens to also be married to a Frey woman.

And you see the WTF flash in her eyes. Because this is the first she’s heard of this…and is it possible there’s something nefarious afoot?

And THEN Talisa says “Let’s name our baby after your dad.” and Robb is all, “YES.” and then…the music changes.

The Rains of Castamere starts playing. It’s a song that’s dedicated to the Lannisters. It’s a very somber song…not at all a celebratory wedding song…It talks of Red and Gold Coats (Lannister colors) and Lions (Lannisters sigil) and sharp claws…

OH. I SEE WHAT YOU DID THERE!

OMG. my heart stopped both times watching this scene.

I wailed the first time. Seriously. I covered my mouth with my hands and tears just ran down my cheeks while THEY KILLED ALL THE PEOPLE.

Last night, I still cried. (I also tried to warn Robb Stark, but he didn’t listen.) My reaction last night was more for Catelyn’s pain than anything else. It was so real.

Okay, and did they have to kill the Direwolf? I mean, IS NOTHING SACRED?

Nope. Anyone can be killed.

Well, I think I’m finally to the 3rd stage of grief…Bargaining. I found myself praying to the Lord of Light to bring Robb and Talisa and little dead baby Ned back. I mean, if he could bring Lord Beric back 6 times, surely he could bring the family back? And then the Undead family could kill Lord  McCreepy Frey and Lord Bolton as well. And while they’re at it, even though I can’t stand Theon, that bastard Ramsay Frey needs to die, too. He’s just mean.

sigh. Even Jon Snow and Ygritte are no longer…at least right now.

I guess the only thing I have left to look forward to is Joffrey dying a horrible death. And also, I’d really like to see Cersi get lit up by a dragon or two.