El Jefe and I met at the Compound for lunch o check out the damage to the once awesome and pristine driveway of gravel.

It wasn’t as bad as I thought it was going to be, however, it was interesting. Lumpy totally caught air after he hit my culvert and I bet he didn’t land for 12 feet. It was pretty amazing actually. We found nails, rocks, truck parts, gloves, a paint pan, BBQ Sunflower seeds, a mint, and a quarter strewn about in the yard. Like WAY STREWN ABOUT. Almost to the house. His truck literally ripped the nails straight out of the landscape timbers. STRAIGHT OUT. AS IN NOT BENT. There are giant rocks that flew from my culvert and landed probably 50 yards away.
Behold Lumpy’s Trail of Tears. or would that be Beers? 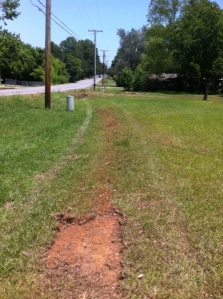 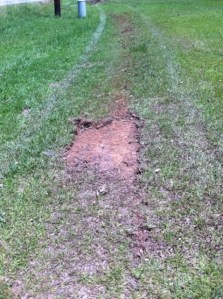 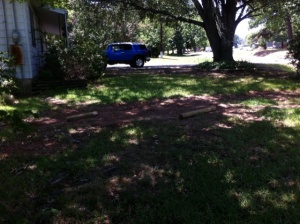 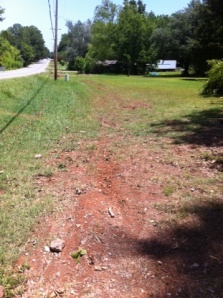 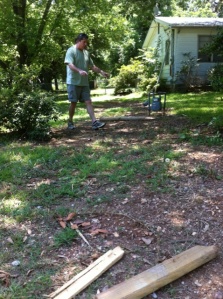 Here is a collection of stuff from my front yard. 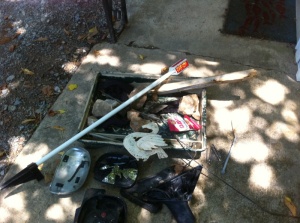 and yes. You are seeing that correctly. He killed my flamingo. Lumpy is gonna pay. 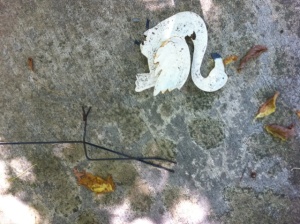 Internetz, yesterday y’all nearly had to bail me out of jail.

I’m not even kidding.

So, I was minding my own business, obeying all the rules of the road, when this bitch woman blew through a yield and nearly slammed into me. I was upset, but these things happen…

Until that bitch woman rolled her window down and began to cuss me up one side and down the other.

After she finished her first tirade I said “You might wanna rethink talking to me like that before I step out of the car and reacquaint you with the rules of the road. Or road rash.”

She called me a few very unflattering names, the least offensive being bitch. The worst rhyming with punt.

And that’s when I lost my cool.

“Are you familiar with the phrase Towanda? If so, then you might wanna get the fuck out of my way. The sooner, the better.”

As she drove off, I saw this bumper sticker:

Are you kidding me?

Sister, please. I will feed on the irony of this moment forever.

I believe in Karma and bitch woman, you got yours coming to you…

THIS (if that link doesn’t work, try this one)is unacceptable. Hatred and bigotry in any form is just plain not okay. Period. And this man is a member of a school board! Is this the type of person you would want representing your children?

“Seriously they want me to wear purple because five queers committed suicide. The only way I’m wearin’ it for them is if they all commit suicide. I cant believe the people of this world have gotten this stupid. We are honoring the fact that they sinned and killed themselves because of their sin.”

“Being a fag doesn’t give you the right to ruin the rest of our lives. If you get easily offended by being called a fag then don’t tell anyone you are a fag. Keep that shit to yourself. It pisses me off though that we make a special purple fag day for them. Ilike that fags cant procreate. I also enjoy the fact that they often give each other aids and die.”

I’m disgusted. Truly, in my gut, disgusted. And I’m sad that Arkansas will get a bad rap over the short-sighted, hate-filled opinion of this one man who happens to live in this beautiful state.

I can’t believe this man holds a position of power in a school district. Shame on you, sir. It seems you’ve forgotten a very important rule in life…DO UNTO OTHERS AS YOU WOULD HAVE THEM DO UNTO YOU. Christian or not, that’s a pretty darn good guideline to go by, don’t you think?

No matter how you feel about homosexuality, you should definitely agree that wishing kids dead is not okay. If you think it is, get off my blog, please. You’re not welcome ’round these parts. I don’t hate you, I just don’t wanna be around you. Kthxbai.

ETA: This is an article that has a screenshot of his actual facebook page and includes more hate-filled quotes, including this gem: “I would disown my kids they were gay. They will not be welcome at my home or in my vicinity. I will absolutely run them off.”

Here at Mel-O-Drama, we prefer to Let Love Rule. Take it away, Lenny:

This is my theme for the day. Hell, maybe even for the week…

So yesterday I was working in the new house…unpacking, cleaning, working on laundry. You know, basic GTL Now, my new laundry room is quite large which is fabulous. It also has lots of shelving…which is also fabulous. However, one of the very sharp edged shelves is right next to the washing machine.

Do you see where this is going?

Yes, I have a lump (his name is Phil). And seriously, I kinda think I might even have a slight concussion…unless everyone sees fireworks when they close their eyes and hears weird voices….(ok, I always hear the voices but at least now I have a valid excuse, right?)

This morning my goose egg is more like a robin’s egg but it still hurts! It’s all bruised feeling and I have a dent in the middle of it. Hmph.

I swear that shelf wasn’t there until I stood up…

I swore I would never get political on this blog. But I think I’m going to have to break that promise to myself. I have no problem discussing differing views, but NO FLAMING allowed. None. Not even toward the candidates. Sorry. It ain’t gonna happen on this blog. It’s okay if you have a different opinion than I do. It’s okay if you don’t like the candidates. It is NOT okay to personally attack anyone. K? I will initiate my autocratic right to delete any comment that I think is personal and inflammatory. You’ve been warned.

The one thing I want most in this world is peace. In my opinion the war we’re fighting has nothing to do with the attack on our country and everything to do with oil. It sickens me. (BTW, I said during the 2000 election that if W is elected, the first thing he’ll do is finish his daddy’s war. I’m smarter than a 5th grader.)

Seriously. I’m trying so hard to resist being political. You just don’t know.

I’m scared that our country may not recover from its current state. I’m terrified that Sarah Palin may be in line to be the next President. (let’s face it: John McCain is old and not in the best of health.) Plus,I can not believe that more people are not outraged with the past 8 years, the state of our economy, and the state of our country.

It’s insulting that this woman was chosen. It was totally a political move. It’s not even about her experience or lack thereof, it’s about what she stands for. The more I find out about her, the more disgusted I am. This is NOT a woman I want to be in the White House.

While serving as Mayor of Wasilla, to save the city/community money, Palin billed sexual assault victims anywhere from $300-$1200 for their rape kits. Sure they used the excuse of being able to bill insurance companies when they could…Aw. thanks. Just one more reason for the insurance industry to raise premiums. And what about those victims who were uninsure? Tough titty. Of course, they would never charge a victim of a burglury for gathering evidence. I guess it’s cheaper to conduct an investigation of a house violation than a body violation.

She slashed funds by 20% for a program that gave teenage moms and their babies a place to live while they worked and saved money. It’s nice that she and her family can support Bristol’s choice but not every girl has a family to back them. And cutting almost $2 million from that program shows exactly how Palin feels about teenage pregnancy. Actions over words, madam.

Palin asked the Wasilla librarian about the process for having certain objecitonable books banned (no books were named) and when the librarian balked at any form of censorship–Palin fired her. NIIIIICE. Sure, she finally relented after a huge public outcry of the citizens, but come on…she FIRED HER for taking a stance against book banning. (NY Times article. You may have to register to read it, but it’s free) As a writer, this makes my butthole pucker.

This woman doesn’t belong in a position of power. I’m sorry. She victimizes victims, takes money from those who need it the most (but she allowed her family to expense $43,000 of instate travel. Yes, I know they’re allowed a per diem as the first family, but please, don’t talk about cutting “unnecessary state spending” by charging rape victims or taking money from teenage moms who are trying to get on their feet when you’re allowing your daughters to fly all over the state for dinners and parties.) And she is all for banning books. There’s other stuff out there…but these are the 3 things that tell me this woman doesn’t think before she acts and that is not a person I want to have control over the nuclear codes.

And this certainly isn’t the direction I think this country needs to head in. There. I feel better now. Thanks for letting me spew. It’s been killing me.

Now for some humor. Michael Palin for President